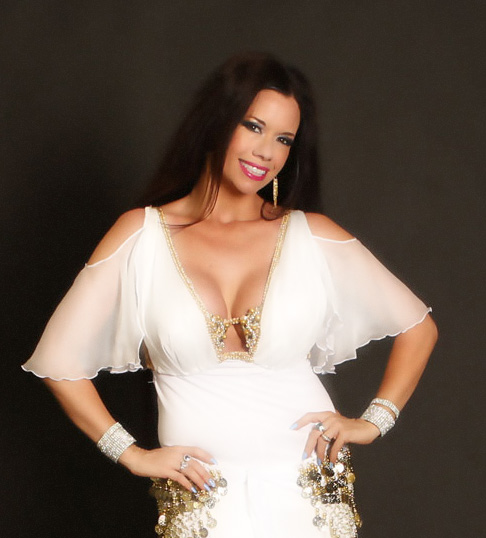 My dance experience started when I was 5 years old; I took ballet from our local studio in Anderson, Indiana for one year.  I wouldn’t take another dance class until I was 15, when I went to Culver Girls Academy and Summer Schools.  I then studied Modern Dance with Ms. Kathy, and Ballet with Ms. Jill Tulchinsky.  I noticed at the time that I really favored the circular movements of such modern dance innovators as Merce Cunningham and Twyla Tharp, and the raw expression of Martha Graham.  When I was 11 my older sister, Caroline, got involved with the Persian culture, and subsequently moved to Iran for 15 years; she is now a Farsi translator.  This early influence of Persian culture showed me the differences between Persian, Turkish, and Arabic languages, music, and dance.  I grew up dancing Persian dance with my new in-laws in Los Angeles, and this exposure to the culture had a major impact on my future dancing.

I then went onto Butler University in 1988 where I earned a B.A. in International Studies with a concentration in Cultural Anthropology in 1992.  As I was at Butler I took non-major dance classes since I was at an internationally acknowledged dance institution.  I took 1 ½ years of ballet, but decided that I had started too late in my life in that form, and that it was too difficult to catch up at the age of 18; it was also undermining my confidence as I was always the girl in the back of the classroom saying, “What are we doing?!”!  I found the self-esteem boost I needed in Modern Dance; I began studying with Larry White at the same time, and decided to continue throughout the rest of my college years.  Larry had been a principal dancer for the Martha Graham Dance Co. in NYC, and so naturally taught mainly her style, although he did incorporate some yoga into his floor technique.  I reveled in his classes, and kept in contact with him until 1998..  I also took a year of jazz dance with Burt Kerwin at Butler, but I didn’t feel the connection to that form as I had anticipated, so I discontinued studying with him.

While I was at Butler I discovered middle-eastern dance outside of the university.  A dance friend and I went to the International Festival in Indianapolis in Nov. 1989 and met some of the members of the Indiana State Association of Middle-Eastern Dancers and Teachers, otherwise known as ISAMEDT, and the Middle-Eastern Dance Co-operative Inc., or MEDCI.  They had fliers with teachers names and numbers, and we chose Ms. Judy Eudaly of Indianapolis.  At this point, I really can say that “the rest is history” as I have stayed within this genre of dance for the past 30 years.  Judy taught the American Cabaret and the classical Arabic style of dance made popular to a large extent by Nadia Gamal of Beirut, Lebanon, and also some folk/gypsy dance of various middle-eastern countries. This elegant Lebanese style of Arabic dance is a combination of the solid hip-work of the dancers of Cairo, Egypt, and the fluid gracefulness of the Istabul, Turkey style, which is not surprising as Lebanon sits in-between these two places.  Her style has become my foundation in the dance, and my love.  A good example of the continuation of her style today is by Amani of Lebanon.  Judy also insisted we have an excellent understanding of Arab music, as one cannot choreograph a piece without knowing what the music is trying to portray, i.e. knowing if it is classical or folk, what country it is from, what region in that country, etc.  Judy got me my first dance gig at the Greek restaurant she danced at in Southport called the Acropolis; this was in 1990 and was my first time ever performing as a professional.

After graduating from Butler in 1992 I went to South Korea to teach English Conversation for a year.  During that time I did not either study dance or perform professionally, but rather taught friends and danced informally at parties.  When I came home I went back to Judy, but felt I needed a different perspective on the dance, so I went to Egyptian teacher/performer Faten Munger of Greenwood.  I studied with her for 6 months and learned more about the Egyptian style of Arabic dance and also refined my knowledge of Egyptian Ghawazee (Gypsy), and Saidi cane dancing.  I began dancing at a new restaurant called Ziyad’s in Castleton.  I also started performing for a show called “Saint’s Neo-Vaudeville”, a kind of eclectic modern variety show.  I did three performances over the course of about a year and a half with them, all of which took place in Indianapolis at the Atheneum, and at the Susurrus Dance Studio.  It was there that I met the musical group Salaam for the first time, and the director of Saint’s, Brian Irwin, invited us both to do a performance for the Nuvo’s Best of Indy awards banquet at the IRT Upperstage Theater.

During this time I was cultivating an interest in the individual style of the whirling Sufi dance, as well; it became my spiritual practice outside of performance, but also became a key element of my individual style that really set me apart from other dancers.  My interest in traditional Turkish Sufi ceremonial dance and music blossomed, and I later met teacher Gail Larson of Bloomington that helped me incorporate the circle dances of Sufism, as well; they are very similar to the folk line dances of many middle-eastern countries, but are done in a circle, instead.

In 1994 a good friend who is also a whirler encouraged me to teach a middle-eastern dance class at her house.  I quickly outgrew her space and applied to teach at Susurrus Dance Studio in downtown Indianapolis; they accepted me, and I started teaching there in 1995 in the style of my first teacher, Judy Eudaly.  I taught 2 ½ wonderful years there, and put on a student recital the second year.  During those two years I met dancer/teacher Rebecca Reneau, and together we formed The Middle-Eastern Dance Ensemble of Indianapolis.  We focused mainly on the folk dance styles of the Arabic and Turkish worlds, and brought that form artistically to the stage.  Some of the performances we did were at the International Festival of Indianapolis, and the State Fair, as well as various middle-eastern dance workshop shows.  I danced individually at the Parthenon Restaurant in Broad Ripple during this time, also, and continued to do so for a total of about fifteen years off and on ending in 2008.

I became interested in Indian Classical and Gypsy dance, as well, and learned an Indian Rajasthani choreography from teacher Nivedita Rangnekar in Indianapolis in 1996.  This broadened my understanding of the origins of authentic middle-eastern movement, and I started to see the correlations between Arabic and Indian styles of dance.

In 1997 I won a partial scholarship from MEDCI to attend the Middle-Eastern Music and Dance Camp in Mendocino, California; that was an eye-opening experience into the politics of the dance, as well as exposure to many different teachers and dancers form all over the world.   I moved from Indianapolis to Bloomington after I got home from the camp with the intention of putting myself close to Indiana University, because I knew that I wanted to go back to school.  I thought that I wanted to apply to the Folklore Institute, but then reality set in, and I realized that I needed to study something that I could actually make a career out of, and also become employable.  However, I decided that I wanted to dance full-time with the musical ensemble, Salaam, and we became the Salaam Music and Dance Ensemble for 2 years.  We did various museum, park, private concert, and educational performances, which included the Indianapolis Children’s Museum, the Indianapolis Museum of Art, and many out of state gigs, as well, including the Cincinnati Children’s Museum.  Our main goal was to educate audiences about middle-eastern culture, and to elevate people’s moods.  During this time I also studied with Ruby Jazayre of South Bend, IN, and Mona N’Wal of Madison, WI; they both studied with Ibrahim “Bobby” Farrah of NYC, and still carry on his style in their own unique way.  I encountered people’s prejudice and stigma about “belly dance” full-face when Young Audiences accepted the Salaam Musical Ensemble without me, the dancer.  I realized that people don’t really “get it” when it comes to women’s sensuality displayed as an art, and they probably never will.

I left Salaam in 1999 to finally pursue and further my education, and that I needed to focus on my studies of pre-nursing.  Once I got into the pre-requisites for nursing I saw that I was still not good at math or science tests, and so I started taking graduate level classes in Anthropology, Folklore and Ethnomusicology, and returned to performing.  I got a job with Clear Channel Entertainment at Deer Creek Ampitheatre at the Camel Lounge, and worked for them for about two years.  I also danced overseas in London and Sweden for corporate events and restaurants.  I then got married in 2002 and had a baby and took some time off of dance and school.  In 2007 I began the Master’s degree program in Ethnomusicology at Indiana University, and graduated in 2012.  I began dancing in Indianapolis, West Lafayette and Chicago at various restaurants, and hookah lounges.  My Master’s Thesis Project, The Mosaic Concert Series:  A Tapestry of Middle Eastern Dance, was to produce and direct five Arab dance concerts, and I worked with Mohamed Shahin, Karim Nagi, and the Bellydance Superstars.  All of these shows changed my dancing drastically, as I was able to study with native instructors.

I’m following the lead of my interest in the healing aspects of the dance, and started research on the sacred geometry of the dance.  Something that I discovered while dancing for Arabs is that in their culture dancers really can be prostitutes, and that no matter how “good” of a lady you are that stigma really never goes away, even though Americans have done a lot to get rid of it in our culture.  I think this stigma is what have keep the healing side of the dance hidden, even to those from the culture.  I’ve become more interested in non-Arabic forms of middle-eastern dance, as well, such as the Persian/Iranian and Armenian classical dance style that sprung from the royal courts.

In 2012 I had my first show in Detroit at the Prestige Club, a Lebanese nightclub with live music and singers.  I danced there until they closed in 2016, and then danced at their new place, the Platinum Lounge.  I met several musicians there and began doing shows in the Arab community for weddings, baptisms, and first communion parties, and became known as a “family dancer”.  Working with the Lebanese and Iraqi communities there gave me exposure to their dances, and I learned a lot.  I began working on my first CD, “Raqsat Katya”, in 2014, and we released in two years later.  Having a direct relationship with the musicians also enriched my technique greatly.  We are now working on our second CD which will be with live music.  I think the greatest contribution to my dancing style has come from my musicians, because while dance teachers want you to dance like them in class, musicians give you the freedom to express yourself and find your own unique style.  I can confidently say that my style has drastically changed from working with live music, and improvisation is my strength.  I love teaching students about the real Arab classical music, and the classic bellydance style that accompanies it.