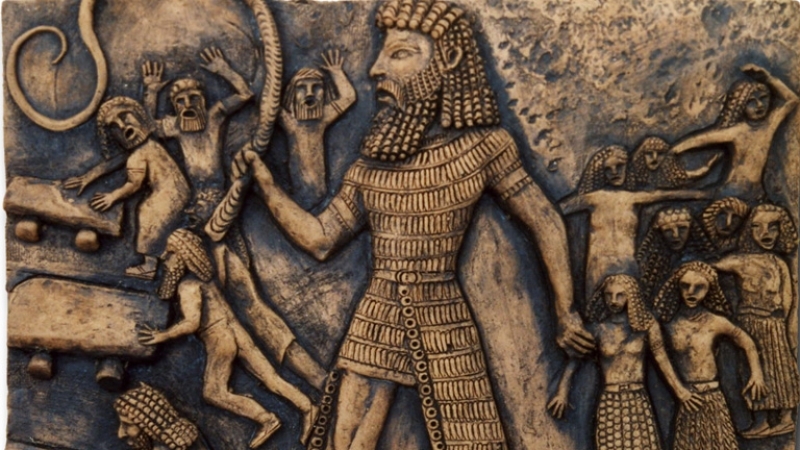 One of my advisors in ethnomusicology was Folklore professor, Dr. Hasan El Shamy.  He is an Egyptian folklorist who has gone to every region of Egypt and recorded their folk stories.  I was fortunate to be able to study with him and have him as a mentor!  What a blessing to have such a great storyteller as a professor, and this is the first tale he taught me:  The Epic of Gilgamesh.  As I am now learning about the Sumerian gods and the Nephelim and how they tie to the Native American tribes I am finding myself going back and relearning Gilgamesh.  There is a wealth of historical information here if you tie in what Dr. Zecharia Sitchin has revealed with the Dead Sea Scrolls research.  Mythology and legends are a very deep rabbit hole that I love to jump down.

Introduction:  The Babylonian civilization during the seventh century BC was located in the Tigres/Euphrates river region of today’s modern No. Iraq and Syria.  As the Semitic culture rose out of the land of Canaan (Palestine) by the Israelites, much of the history of the Semitic-speaking peoples, especially the Hebrews, is shared with the Babylonian culture in their legends and lore; obviously, central themes in their stories are similar.  All of the information in this article is based upon the book, The Gilgamesh Epic and Old Testament Parallels, by Alexander Heidel, copyright 1946, printed by the University of Chicago Press.  In the middle 1800’s explorers Austen H. Layard, Hormuzd Rassam, and George Smith found much of the material of Babylon’s greatest epic hero, Gilgamesh, at the temple library of the God Nabu (Nebo in the Bible), and the palace library of the Assyrian King Ashurbanipal (668 ca-633 BC).  The material for the epic is found in tablet form; other tablets of the epic have been found from a dealer in Baghdad, Iraq (the tablets most likely did not come from Baghdad); Ashur, the ancient capital of Assyria in No. Iraq; and Hattusas, the ancient capital of the Hittites in modern day Armenia.  Although the tablets are in disrepair, the story of Gilgamesh is easy to follow.  The themes of the epic are played out as a tragedy, with death in its many aspects serving as a central theme; the conclusion is that one cannot escape death, so live and be happy while one is alive.

Synopsis of the epic:

The story opens up singing the praises of its hero, Gilgamesh; this is similar to other epics such as the Odyssey, and the Aenid.  These virtues are:  one who saw everything and knew all things; one who saw the occult, or the hidden things and brought them to light; one who brought information of the days before the Flood; one who went on a quest for immortality, and became weary; one who engraved on a tablet all that he had done and suffered; and one who also built the walls of the ancient Babylonian city Uruk, and its holy temple Eanna.

Apparently, Gilgamesh was a tyrant, and the gods saw fit to discipline him.  They sent him an adversary, Enkindu, to bring order to chaos, and put Gilgamesh in his place.  This was done, but not by might; Enkinu won the friendship of Gilgamesh after their initial battle, and in the end, broke his heart with his death.  After Enkindu was gone, Gilgamesh went searching for the meaning of life, and also how to escape death by living forever.  The love of a friend is finally what brought Gilgamesh under control, and brought peace back to the kingdom.  His animal nature was tamed by his spiritual awakening of his heart and soul.  In the end, the gods did have their way by bringing Gilgamesh’s tyranny to an end, but it was not done by force; it was done with love.  It just goes to show that if one wants to bring the “nafs” (inferior ego voices) under control, one should not focus on force to gain power, as this is a display of one’s animal nature, the very thing one is trying to escape.  One should focus on love and kindness, which comes from the soul, not the body; by linking up with one’s superior voices that are connected to God, one may transcend one’s animal nature, and come closer to achieving a more angelic consciousness.  First they went on a long journey of adventure together, however.

They travel to a distant cedar forest that is guarded by a terrible ogre, Humbaba, which has been appointed by Enlil, the lord of the gods.    They desire to cut down the sacred cedar of Humbaba, but there is a guard at the entrance to the forest; they kill the guard, but once the gate is opened Enkinu’s hand is paralyzed by a curse of the gate.  Gilgamesh’s cries perhaps bring back movement to his hand, and they proceed.  They find the tree, and began to axe it down when Humbaba comes running.  They are so frightened by his presence that Gilgamesh cries out to Shamash, the sun god, for help.  The prayer is answered and winds sent from eight directions come and make Humbaba surrender; the ogre’s head is chopped off, and the two friends make their way back to Uruk.

Upon their return a festival is planned in honor of their victorious adventure; Gilgamesh cleans himself up, and Ishtar, the goddess of love, becomes smitten with him, and offers to be his wife.  Gilgamesh believes Ishtar to be Big Trouble, and rejects her proposal in an insulting manner.  Ishtar is infuriated and asks her father, Anu, for help to uphold her honor.  Anu consents begrudgingly, and sends down a bull, to fight Gilgamesh.  However, he kills the bull, and Ishtar ascends the walls of Uruk cursing him.  Enkindu and he wash their hands in the Euphrates River, where Uruk is banked upon, and ride triumphantly through the city.

As both heroes have killed monsters that had been sent down from heaven, one of them must die.  The gods decide that it is Enkindu who must go, and they make him sick with an illness that ends his life.  Gilgamesh is utterly heart broken, and cries for seven days and seven nights.  This leaves him to ponder death, and the meaning of life, and he goes on a vision quest looking for answers.

Gilgamesh seeks out Utnapishtim, the Babylonian Noah, who apparently lived in the mountain range of Mashu, the modern day Lebanon and AntiLebanon Range.  The gate through which the sun passes on its daily journey is here, and a pair of scorpion-looking monsters guards it.  They recognize Gilgamesh as a demi-god, and allow him to pass through.  After twelve hours of traveling in darkness he comes out on the other side where there is a garden of precious stones, trees and shrubs, fruit and vine, but all made of glittering stone.  At the edge of the sea dwells Siduri, the divine barmaid.  He asks her where he can find Utnapishtim to find the secret of immortality.  She advises him that his quest is in vain, as death cannot be avoided.  She realized that he will not listen to reason, and leads him to the boatman who will take him across the sea of death to where Utnapishtim lives.

Utnapishtim tells him the story of the Flood, and how he obtained immortality.  He then suggests to Gilgamesh that he should not sleep for six days and seven nights, and that if he can master sleep, the twin brother of death, then he may gain immortality.  Gilgamesh fails, and falls asleep, however.  Defeated, he returns home to Uruk with the boatman, who was banished from the island for allowing Gilgamesh to enter, and is told one last secret:  there is a plant at the bottom of the ocean that if eaten will give immortal life.  He finds the plant, and starts homeward.  However, they stop by a pool of cool water, and a serpent comes up and snatches the plant away from Gilgamesh, thus taking his last hope of immortality away.  He weeps bitterly, and decides to return to Uruk to be happy by working with his hands to build his city even greater than before.

Another version of the tale is added in later versions of the epic on the tablets found at Hattusas.  In this Gilgamesh makes two wooden objects, called pukku and mikku.  They fall into the underworld and he asks Enkindu to retrieve them.  The gods of the underworld will not release Enkinu until after much deliberation; Gilgamesh asks Enkindu to tell him what is in store for man once he dies, and Enkindu tells a dark and gloomy tale for what man has waiting for him in the underworld.  The tale ends on this somber note.

Old Testament parallels to the Epic of Gilgamesh:

Many themes and elements of this epic are present in the Old Testament story of creation.  Let’s take a look at ten of them:

The Hebrews, on the other hand, definitely had a concept of heaven and hell.  The connotation of the word “She’ol” is hell, the place where sinners go; it also means “the grave”, perhaps implying that if one does not develop one’s spirit, it cannot ascend the body, and will stay in the body when dead, thus staying in the grave of the earth to be devoured by the worms, and possibly dug up by tillers of the land in subsequent years.  There is a choice, however; if one is pious and does good deeds for others, then he/she can go to heaven.   What a revelation the Hebrews must have been to the peoples of that time!  They showed a gateway to an afterlife that in years before had not been thought possible.  The place of hell is within the innermost parts of the Earth, below the sea; this is similar to Babylonian thoughts.

According to Professor El-Shamy, there is only one theme in the epic of Gilgamesh that is found in Stith Thompson’s Motif Index of Folk-Literature, 6 vols., or in El-Shamy’s Folk Traditions of the Arab World:  A Guide to Motif Classification, 2 vols.  This theme is the “Rejuvenation by Plant”, D1338.2.