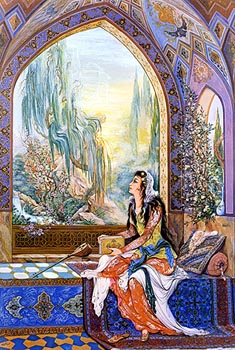 The links between Arabic literature and music are many, but can particularly be seen in a parallel fashion with the Mawwal, a form of sung poetry.  Imagine the camp fires of the Bedouin late at night with the tribe all gathered around listening to a bard, or a musical poet, who sings songs of topics such as love, war, and comedy to an awaiting and eager audience.  The Mawwal is one of the most enduring forms of Arab song to this day, so let’s take a look at what its format is and how it relates to Oriental Dance.