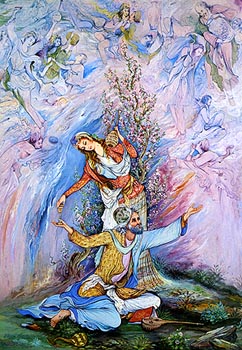 Achieving altered states of consciousness, or ASC, is a prime factor in many healing rituals and ceremonies; a ceremony is made up of many rituals.  What I have done is to structure my argument into:  explaining ASC, the main characteristics and their differences in several cultures; and how the usage of ASC is a factor in the shaman’s or religion’s credibility and status.  Sacred movement is an integral part of many shamanic rituals, and is an important factor in achieving ASC.

Most religions or cultural belief systems see the world as divided into “reality”, or what we can see with our own eyes, and “the invisible world”, or “the other side”, that which we cannot see.  This invisible world is multi-dimensional and is the place people go when they achieve ASC.  What is there?  Well, that is entirely culturally dependent.  Some of the theories include deities, i.e. gods and goddesses, God Him or Herself, or spirits of ancestors or “entities”; some would say that it is aspects, or metaphors, of our own subconscious psyche that we see in the other world.  It is generally thought that going to this world is the place where healing can occur, which is why ASC is so common in many indigenous healing techniques.  The physical outcome of an ASC is trance, or the achieving of ecstasy; once this level is found, then one is in the right place for healing to occur.  We are taken to a still place where our psyche can be reset.

How does one achieve an ASC, or trance/ecstasy?  There are many ways, most of which are performance rituals, which include music and sacred movement (not the same as dance), psychotropic drugs/sacred herbs, chanting (not the same as music), magical flight, and spirit possession as general categories.  One of the best examples of ASC being used for healing is the video, “Floating in the Air, Followed by the Wind”; the title explains what it feels like to be in trance.  It takes place in Malaysia with the Tamil speakers from India; they have migrated there, apparently mostly for work.  The ritual that the video portrays is for the god Murragon and is called “Tai Pusam”; a peacock represents him, and he helps his people get rid of misfortune.  It takes place when the Sun enters the tropical zodiac sign of Capricorn, or on the Winter Solstice, December 21.  The main occurrence at the festival is the piercing of the flesh by specific participants; it is usually the tongue or the back and chest, and this pain brings on the endorphin rush that is common to many trance states.  These patients come for healing of misfortune in their lives, whether it is sickness, or the lack of work.  Also, if someone has done the ceremony successfully in the past, and Murragon has graced them with blessings, they must always pay homage to the god by doing the ritual every year.  The kind of ceremony this falls into for the Tamil is “Arul”, or a ritual that is for attracting the divine grace and blessings of the particular god they are invoking.  Achieving ecstasy is the goal of the ritual, as that is when the god’s grace descends upon the patient.

This ritual shows many of the characteristics of ASC; that is, contacting the invisible world, using the pain/pleasure continuum in the body to bring on trance (the endorphin rush), having many participate in the ritual but being lead by one person of authority, and the belief in deities on the other side that descend upon the patient while he is in a state of grace.  However, there are many variations to cross-cultural indigenous healing traditions.  One of the differences that can occur is the role of the leader, or the “shaman”.  I put “shaman” in quotes, because Shamanism is very specific to the indigenous healers of Inner Mongolia and Siberia, but has become a popular term to describe healing leaders of many indigenous areas.  For instance, in the traditional Siberian culture of the Nganasan, as seen in Milovsky’s article, “Tubiakou’s Spirit Flight”, the author speaks of the shaman as the leader of the ritual, and also the one who achieve trance for his patient.  He dons the traditional dress, and uses the traditional drum, and contacts the spirit of the afflicted; then, he goes on a magical flight to meet and battle the spirit.  This can be very dangerous indeed, as he may not come back; for this reason it is not seen as safe for the patient to go on the journey, as he/she may not have the spiritual power and authority to deal with the spirit of the sickness.  Alcohol or psychotropic drugs may be employed to help the shaman achieve the necessary trance state.

Other cultures say that it is the patient that must achieve the trance, not the shaman.  In Islamic North Africa and the Arabian Peninsula the zar ritual is used to rid negative spirits from the body of the patient, but the leader of the ceremony does not go into trance, it is the patient that must achieve ecstasy for healing to occur.  In A’isha Ali’s video of “Dances of Egypt” she shows a zar ceremony, and music and dance are essential for the patient to achieve trance.  While there is definitely a leader of the ceremony, a shaman figure, she is merely the orchestrator/mediator of the event, not the central figure.

In the modern day New Age movement we see Channeling as a form of contacting the invisible world that almost anyone can do; it seems they are saying anyone can become a shaman.  In the Pentecostal tradition of Glossolalia we saw a similar phenomenon, but there each person’s role in the ceremony was consistent, i.e. once an interpreter, always an interpreter; one cannot switch roles from speaking in tongues to interpreting.

How does achieving ASC change the status and role in the community of the person?  I think perhaps the best article on this is, “The Woman Who Didn’t Become a Shaman”, by Margery Wolf (1960).  This article shows many facets of what it means to be a shaman in Taiwan; usually the person is lower class, and male.  Even though the woman, Mrs. Chen, had many attributes of a shaman, she was eventually labeled crazy.  She had not undergone formal training to become a shaman, and a shaman in a near-by town interviewed her and proclaimed her a fraud.  She was also an outsider in the town she lived in, and not established there long, so her sincerity was questionable.  The vehicle of becoming a shaman usually brings in much needed income to the poor family, but in this case she was seen as exploiting this social role for her own good, and posing as a phony.  Perhaps a god was really trying to speak through her, but others saw her faking it to get some recognition.  Apparently, in that society the patriarchy had the upper hand, too; perhaps if she were a man, it would have been a different fate.

The video “Peyote Road” is an excellent example of how psychotropic drugs used for religion in modern times is seen.  The use of the cactus button, peyote, is central to the Native American Church.  This sacred plant helps the believer to achieve trance, or ASC, and contact God.  However, as it is a “drug” as seen by the modern authorities, it is illegal in the US.  This controversy of whether or not the church can use it has turned into a Supreme Court battle, with the followers of the church eventually losing most of their rights.  In this case, ASC is seen as something threatening to the mainstream culture of the US; it is not seen as a sacred plant, but as a drug, such as LSD.

Achieving ASC is indeed seen as threatening to most people.  The spiritual authority that one feels when one is in ecstasy can been seen as an affront to whatever government is in place at the time.  For instance, the Ghost Dance of the displaced Native American tribes in Oklahoma, Nevada, North Dakota, and Washington State shows how a colonial government was trying to take away any kind of power from the people they sought to suppress, even if it is spiritual authority.  Evans-Pritchard’s work in the Sudan with the political prophets there were also seen as a threat to the colonial government, because their achieving ASC in rituals and making prophesies moved people to action.  The words that were spoken during the trance made sense to people, and hence they rallied behind the prophet, and against the establishing governments.

In conclusion, ASC is a technique that many cultures use for personal healing, but also for community/social healing.  It is effective on a physical level, but also on a metaphorical level.  Contacting the invisible world is strong medicine, whether it is for a patient’s disease, or a culture’s cancerous growth that must be corrected.  The authority invested in the one who achieves ASC translates into social power; sometimes it is good, sometimes it is bad.  Regardless of the social consequences these types of healing rituals still persist and now are being taken seriously in the West, such as the popularity of Ayahuasca.  Modern medicine is understanding the importance of meditation and its affects on the nervous system.  All of these mergings of Eastern and Western medicines are helping people to come into harmony with their lives and environments.