In this article I will be taking a look at the Awlad ‘Ali, a Bedouin tribe in the northwest of Egypt, and their perception of social modesty called hasham as seen in Lila Abu Lughod’s classic ethnography, Veiled Sentiments:  Honor and Poetry in a Bedouin Society.  This book explores the complicated communication of politese between people using poetic phrases with hidden meanings, and how these cultural behaviors are taught.  Etiquette is a part of life and culture that provides tools with which to help social interactions become somewhat predictable patterns, and to help social discourse operate more efficiently.  Children are socialized by their parents as to what the normative social behavioral expectations are in their culture; these patterns provide a safety net of boundaries within which people live their lives.  Underneath this etiquette, however, one can uncover the virtues that a given culture prescribes as honorable.  As being a dancer is such a stigma in Arab culture it helps to understand what is the thinking behind such a belief, and what is considered honorable or transgressive behavior. 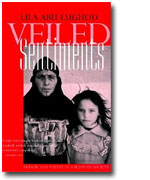 The literal translation of hasham is:  modesty, shame, or shyness.  Abu-Lughod says that propriety is another interpretation.  Dictionary definitions do not help one to understand the function in everyday life, however.  It is important to understand at this point that hasham only occurs in the atmosphere of unequals, in other words, amongst people of differing statuses.  Abu-Lughod speculates that this is why segregation of hierarchies is so important to the Bedouins; no interaction means no danger of transgression.

Some of the body language of hasham include:  veiling in all forms, dressing modestly, downcast eyes, humble but formal posture, and restraint in communications, including eating, drinking and smoking.   For women this entails restraint in front of men and older women; one must literally bow down to one’s elders and those in authority.  While one must certainly be clever to ascertain who to hasham, it appears to me that this social technique is mainly an action oriented phenomenon, or rather, a “non-action” technique, as one’s aim is self-control.  It is interesting that in not acting out socially a woman can gain social mobility and honor; through self control she can control the boundaries of her social life.

Hasham as seen in hospitality:

Abu-Lughod states that hasham is a social tool that helps mainly youths and women behave correctly in front of their social unequals.  As I have not personally seen the Awlad Ali in person I cannot tell you how their hospitality functions; I can only speculate on what Abu-Lughod tells us.  As deference to superiors is the main function of hasham, I know that this translates into caring for others of higher rank.  For instance, all of the household chores that women do, men get the first priority.  A woman will get up out of bed, for instance, if her husband comes home and needs food, or if he brings guests, she will make tea.  The men always eat first, and separately, from the women.  Even the men’s laundry, says Abu-Lughod, is washed separately from the women’s; this is because it is believed that women are dirty and men are more spiritually pure, and therefore their clothes should not be washed together.

Virtues of a culture as seen through Hasham:

As the definition of hasham states, modesty is a key virtue of the Awlad Ali.  Self-control brings honor; lack of self-control brings shame.  I would speculate that one could expand the idea of modesty into other spheres of this Bedouin culture’s morality.  Even though hasham mainly happens with youths and women, I am sure that modesty is a virtue with men, too.  Even though the men hold the reins of authority in this culture, it would seem to me that a man would have to gain the personal approval of his peers in order to ascend socially; being modest would naturally make him more popular with his equals and elders alike.

Piety is another virtue I see with the Awlad Ali.  This is not unlike many other Muslim cultures; showing submission to Allah in everyday affairs, such as in the phrase, Insh’Allah, or “God willing”, demonstrates that one is humble and moral.  As the function of hasham is deference to superiors, showing deference to Allah demonstrates to others that you are worthy of honor.

It seemed to me that these Bedouin women did not have much room for maneuverability in their society.  These women had to be clever in order to know whom to hasham, but aside from that their cleverness did not bring much social advancement.  This society seemed more strict and orthodox to me; perhaps this is because they are a more secluded culture.  A woman can gain honor by acting modest in front of her superiors, but hasham does not seem to help her advance much socially, except for in marriage.

Social hierarchy as manifested through Hasham:

The Awlad Ali is a segregated society; they are very strict with their ideas of morality and the separating of the genders.  Social hierarchy is as follows from high to low:  elder men, adult men, elder women, adult women, and youths.  As a result of this stratum young women and youths must hasham more; I would also speculate that within each sphere hasham takes place for social advancement.  Therefore, relationships of equality and inequality are a main factor in this etiquette; one only hashams one’s superiors, not one’s equals.

Relationships of equality with the Awlad Ali:

One’s equals in this society usually means persons of the same age and sex; as education is not as common for them this is not usually a factor in social equality, but may be for men.  Women tend to be more illiterate for this Bedouin group so learning is not often a common denominator for equality for them.  Having noble lineage, marrying into a good family, self-control, and using hasham, are some of the things that can help a woman gain social approval amongst her peers, and this in turn will elevate her in their eyes.  Likewise, having the above factors in common with others will put similar women in the same social category; hence they would be social “equals”.  In this case of social equals one does not use hasham; in fact, not using it means that you are showing that you are trustworthy.  Not using hasham shows the other that they are included in your personal circle, that they are a part of your extended family.

Relations of inequality with the Awlad Ali–hierarchy and Hasham:

After reading the chapter in Lila Abu-Lughod’s Veiled Sentiments on the Bedouin Awlad ‘Ali’s notions of honor and shame my personal opinion is that the ultimate purpose of using hasham is to spare the persons of inferior social status embarrassment and humiliation in the face of their social superiors.  Just as honor in this Bedouin society is defined as autonomy and equality in the social sphere, the potential for shame occurs when one is dependent and amongst unequals.  In their society this implies that women and the young are dependents; only asl, or noble origins, can improve a woman’s or youth’s status without any effort on their part.

According to Abu-Lughod, gadr, or the heart of power, is defined when one is able to be generous and provide for others.  This usually occurs with the superior in the social hierarchy scheme, but I would speculate that it also occurs amongst the equal’s superiors, such as with the leaders and elderly amongst the women, and the older of the youths, and not just the men.  Women are clearly dependents in this culture, and therefore at the bottom of the hierarchy; they must strive harder to achieve honor.  One way to do this is to voluntarily defer to their superiors.  Men in this society must achieve honor, and hence autonomy and equality amongst peers, by moral worthiness; inferiors are barred from this method amongst unequals, but they can use the loophole of voluntary deference to superiors as a sign of independence, as they are freely submitting and not being coerced; in this way women may gain moral honor.  Forcing an inferior to submit brings shame to the dependent, but voluntarily bowing down to superiors brings honor.

Agl, or social sense and self-control of honorable persons, is similar to hasham.  Children must be taught to tahasham, so that they know their place in the social order.  For a woman, having agl translates into the behavior of deferring to superiors.  A woman who lacks agl is seen as willful or slutty, says Abu-Lughod; however, amongst equals the qualities of willfulness is seen as admirable.  Hasham, in turn, implies ways inferiors petitions will be met; to not follow the law of social discourse not only means that you will not get what you want, but also that you will lose honor.  Knowing when to listen, when to speak, and when to be willful are signs of agl; also, moral virtues of generosity and honesty bring respect amongst unequals.

Exposure or vulnerability of the inferior’s weakness in the social hierarchy is what hasham aims to negate.  Being exposed to more powerful forces is seen as literally making one sick, hence hijab, the general Arabic term for the woman’s veil, translates as “amulet”.  The social protection one must wear in the face of vulnerability is the cloak of hasham.  Complete avoidance of interaction with unequals is seen as the best protection.  It is important to also understand that one does not hasham one’s equals or kin; in fact, one makes a concerted effort to expose oneself in these situations, as it is a sign of trust and friendliness.

Hasham is a technique to ensure that one does not embarrass oneself in public; this in turn implies gaining honor and respect.  This way the powerful do not have to show their strength to the weak, which would humiliate the inferior; self-control of the weak ensures their social success.