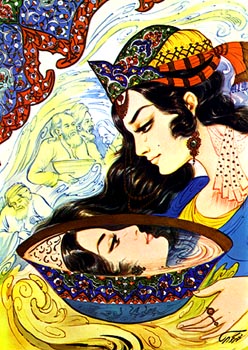 Conceptualizing what World Music or traditional bellydance should be like is a bit like trying to pin down a drop of water with oily fingers:  it slides out from underneath, and you can never fully put your finger on it.  I believe this is because, as Bohlman says in his introduction to  “A Very Short Introduction to World Music”, “World Music is simply traditional music repackaged and re-marketed as popular music.”  Is this the same for bellydance, in all its genres from Classic Raqs Sharqi to American Tribal?  The question we must ask ourselves is not “What is World Music”, but “Why has this music become popular?”  What is “new”, anyway?  In this article I will expound upon some of the areas that I saw needed further discussion, or explanation, and also my own experiences with these phenomena.

According to Bohlman, there are two contradictory points of World Music:  the good and the bad.  The good side says that there are many benefits to World Music.  It brings people together, it helps us to share and learn from each other’s cultures, and this helps to rid ethnocentricity and racism, or so we hope.  World Music can also bring about new styles of music, and thus inspiring artists in collaboration with other artists who share similar visions.  The bad side tries to conglomerate music together into one nice, neat little package that the music industry can sell.  It destroys the local, and expounds Globalization.  It erases the identity of the “native” and puts in its place something that is palatable to people from the Western European descended cultures, i.e. the hegemony.

Bohlman also says that “encounter creates the conditions for exchange”, and Jocelyn Guilbalt attests to the fact that it is this very exchange that is the transmission for artist inspiration in traditional cultures.  What is new, really?  What culture has not borrowed something from their neighbors and added it to their own?  Hardly any culture can say that are “pure”.  Guilbalt looks at the concept of  “creolization” to show that assimilation of cultural traits is how cultures come to be, so accusing World Music of destroying some kind of “pristine” tradition is just not based in reality.  I would add to Guilbalt’s argument, in that not only is nothing “new”, but that what is new is that things are speeding up faster now that in any other time in history.  Creating new fusions styles that are certainly “new” in their names, but that take from “mother” traditions is what I believe will not only be the hallmark of the future in music, and that it is infinite.  Somewhere in our beliefs about music we have incorporated this idea that there is a finite number of traditional musics in the world, and no more can be added, and anything “new” is not traditional.

Bohlman also expounds on the idea of World Music as experience.  This is a pretty broad definition, but harkens back to what Guilbalt was discussing with the process of how World Music is formed.  In phenomenology we see that the individual’s identity is tied up with their notions of “symbolic interactionism”, or how they symbolically interact with their environment.  It is this interaction, this “experience”, that as Bohlman says, is the impetus that brings these new forms and genres of World Music into being.

Timothy Taylor discusses discourses on World Music, and showed how they betrayed old sensibilities about music of the “Other”; common strands included discourse on:

Images of the “Happy Native” emerged, and came into question.  Taylor says that record companies used the “splatter method” of throwing a bunch of nice sounding words together to describe this new “World Music” that they were trying to sell. The idea came to be that if you were making any money or trying to make any money off of your World Music recordings, that it was not the “real thing”.  What is this elusive “real thing”?  It is a perception that something is untainted and “pure”.  World Music loses its ethnomusicological purity in that the performers become artists, and not “natives”, according to Taylor.  “Selloutism” is a symptom of World Music.  I would argue and say that this is all a façade; every artist needs to make a livelihood to further his/her art, and the artist who says that they are only doing it for the love of the art is often caught in the spokes of the industry wheel.

Deborah Wong and Bruno Nettl discuss the problems of academia in solving the problem of where to put music of the marginality in schools.  As the music of the center of society is catered to in music schools across the Heartland, along with this centricism is the judgement that they are the only “good music” that their students should be studying.  My own personal experience in dance at these same institutions parallels what Wong highlights in her research with four female professors about this phenomenon of undercutting music of the “Other” in institutions.  A general lack of respect, which flows down to a lack of viable resources in the department, is what instructors of ethnomusicology have had to suffer through in the past century.  Being the “token ethnomusicologist” in a traditional music program has driven some of these women to seriously consider why they stay in their fields.  I would say that the way we as ethnomusicologists have dealt with this is to “play the game” their way, to use the tropes of the center to gain some ground for our field.  I would argue that it is not good enough for us to simply beat them at their own game, no; we must change the game if we are to gain ground for music of the “Other”.  The reason is that we need to eradicate this notion of the “Other”.  All music is folk music.

If we continue to play their game, this game of believing that somehow we are less than them, by giving into the power plays and struggles of the university, then what will be left for the future generations of children that come from both sides of the fence?  The only way to combat this kind of racism in the academy is head on.  We must change the playing field forever by standing up to the Federal agencies that set the guidelines for standards in music and dance scholarship.  We must as ethnomusicologists become lawyers of sorts to get equality in education pushed through.  It is not enough these days to just do outstanding research, to publish books that may or may not be read outside our field.  I believe it behooves us to think about the future of our discipline and stand up to the bullies in the Music and Dance departments that we work in to change the curriculum requirements for the future.

As a female aspiring ethnomusicologist I have encountered what Wong has described, but unfortunately in my own field of dance.  It seems that the struggles that we have with the music field in regards to marginality and gender have spilled over into our field, and have caused in-fighting and judgement of what constitutes “worth” scholarship.  Middle Eastern dance is not as profitable or marketable to professional dance companies, and so ballet and modern have remained the dances that get funded.  I hope that there are enough brave souls in our field to change the course of the future of our discipline, so that every music and dance student of the future has the opportunity to learn all traditions equally.